It’s FIFA World Cup time! This means that millions of sports fans will be spending half of their summer in front of their TV screen, computer, smartphone or in France, to cheer for their favorite teams and players.

Well, this World Cup would be pretty much as important as any other if it wouldn’t be for one small detail.
This year, everything is about to change.
Never in the history of women sports has a competition generated so much noise all around the globe.
And this is very important.
Because in 2017, while 83% of sports were giving equal money prizes to men and women, soccer/football retained the largest gender pay gap.
And the situation has not evolved so much over the last two years.
In this blog post, I’ll address all you need to know about the FIFA Women’s World Cup 2019, and why it’s a true game changer for feminine sports.

Starting with the key indicator to analyze an event’s success: the amount of tickets sold.

Most games are now fully booked.
If you were planning to buy tickets to go see key games with your friends and family, you’re probably too late as most of them are now completely sold out. A first.
“Smashing records”, say FIFA officials.
In fact, 50 days before the competition started, FIFA announced that they had already sold 720 000 tickets and that most of the games were fully booked.

2. A LOT of traction online

The official pages of the competition are followed by millions of people (numbers as of June 4th) and each post triggers thousands of interactions and conversations.
Twitter (700K+ Followers)

Who is she? Where did her influences come from? And what does she think about #DareToShine? 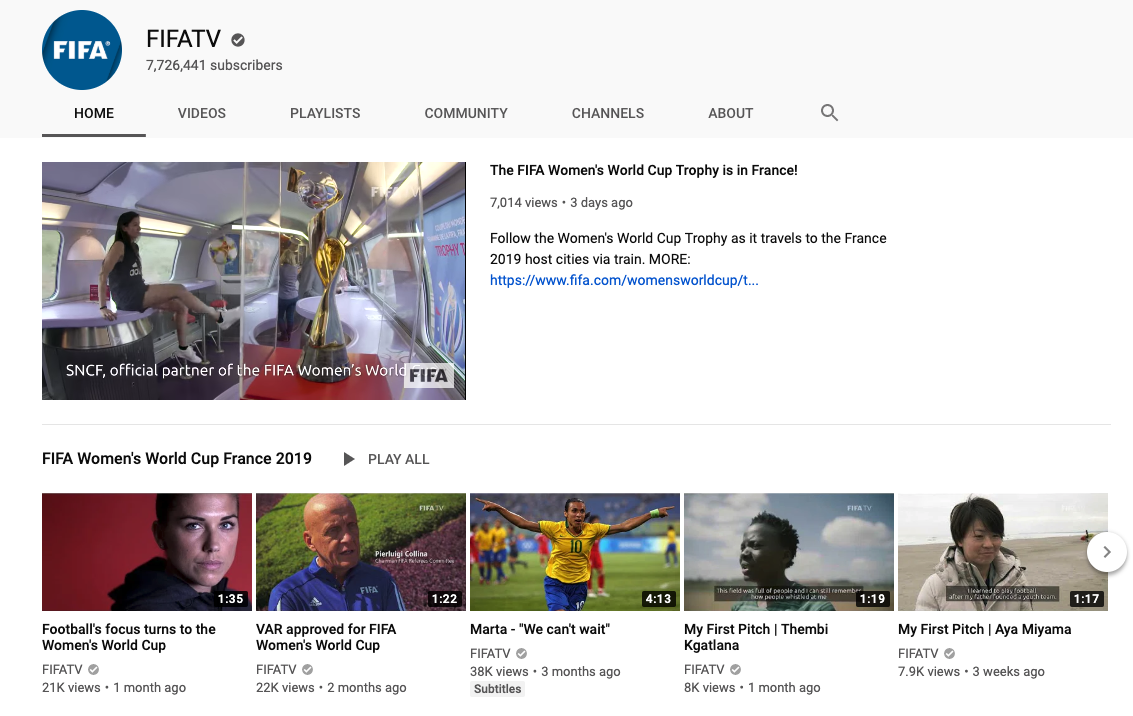 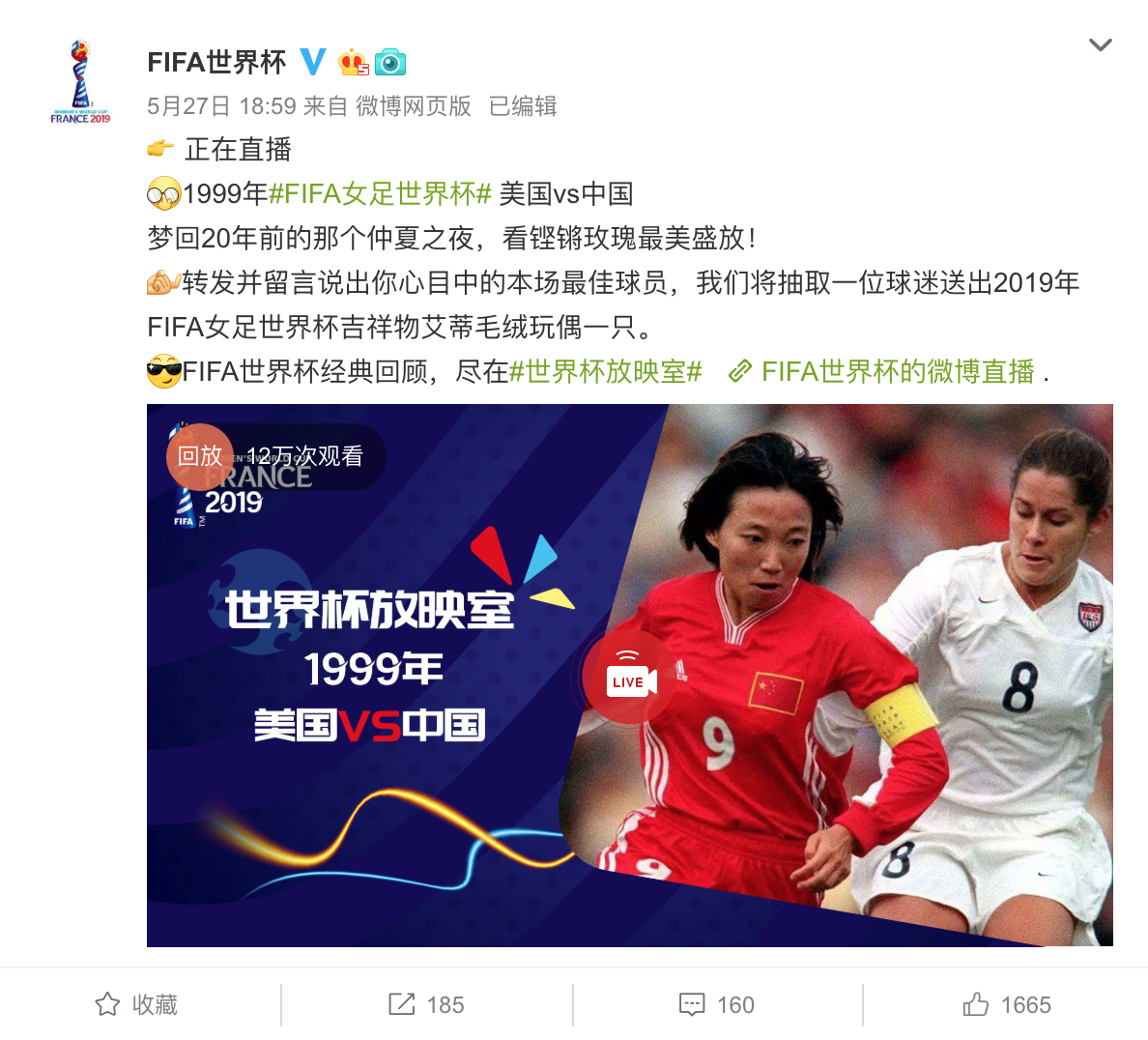 But what’s much more interesting is that the competition will definitely be generating more noise than other (meaning masculine) sport competitions, such as the final of the Ice Hockey World Cup, held on May 26th in Slovakia (20K mentions).
This year’s feminine World Cup is triggering thousands of conversations. And most of it is positive.
June 24th update: we caught about 600 000 online conversions including the official hashtags of the competition, with a pic of mentions on June 24th, with 107,908 mentions. 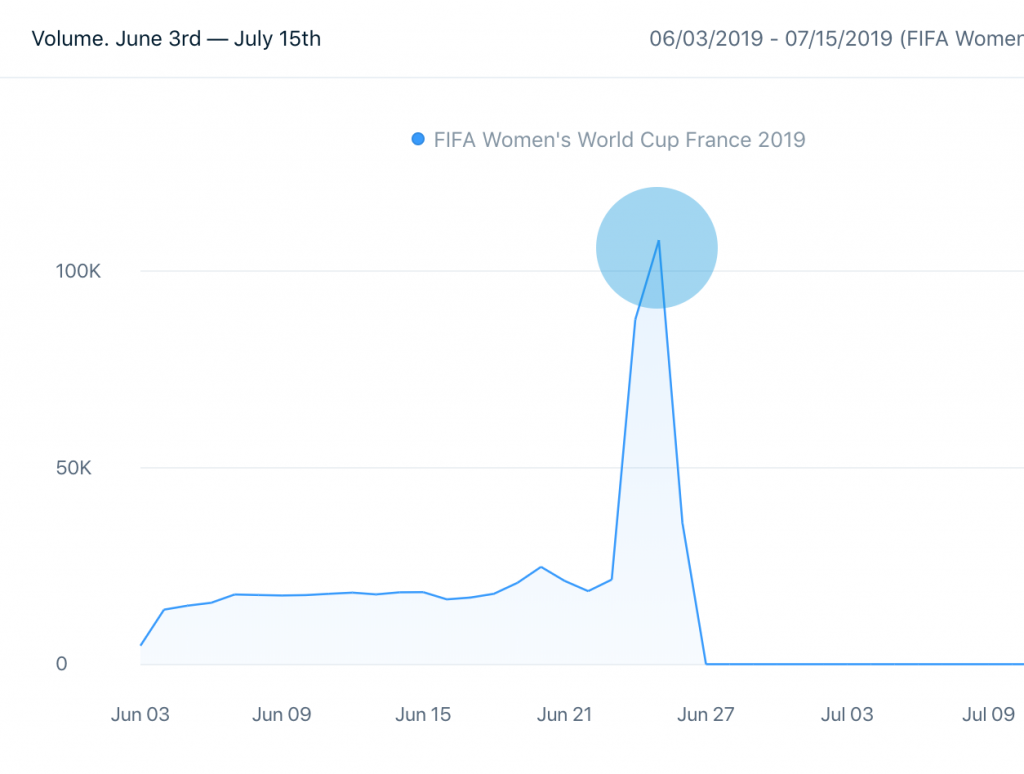 June 24th is the day when USA and Sweden won their ticket to the Quarter Finals, respectively eliminating Spain and Canada. And fan where clearly very vocal about it!
Besides, the reach (or potential touch points) of the competition is quite impressive. As of June 24th, we caught a cumulated reach of 465 billion.
What does that even mean?
It means that, between June 3rd and June 26th, we humans – 7.7B of us – potentially heard of the competition more than twice a day (2.51 times exactly).

In 2015, the Women’s World Cup did not attract many top tier sponsors (Coca-Cola, Adidas, Hyundai–Kia, Visa, and Gazprom).
Nothing ground-breaking this year, but Wanda and Qatar Airways joined the list.
Gazprom is not sponsoring the event anymore after the Canadian government asked for the company to be added to a list of organizations sanctioned for supporting the Russian annexation of Crimea.
On top of it, the event is sponsored by 6 additional local (French) companies.

Why does it matter?

Without the help of sponsors, the event wouldn’t be profitable for the organizing country.
In 2011? For example, sportcal revealed that “Germany’s budget for hosting the 2011 edition was €51 million, with €25 million coming from the sale of 782,000 match tickets and €24 million from sponsors”.
What’s in it for brands then?
Sponsoring events is also one of the best ways for them to generate awareness.

FIFA has set a total prize money purse of $30 million given as follows:

Now, it’s fair to assume that FIFA is not going to invest as much money in a competition that doesn’t generate as much cash as the men’s competition.
Right?
Well, we now know that stadiums will be full and all the games will be shown on TV (meaning FIFA sold a whole lot of TV rights). And most importantly, FIFA currently holds about $2.7B in cash.

FIFA can make as many great ads to promote the event, at the end of the day, it seems that women play for the glory, while men play for the money.
As you can imagine, social media and news outlets are behind vocal about it.
Sadly, rare are the official football/soccer institutions to speak out about this. But this didn’t stop the Australian Players’ Union to do it, urging FIFA to increase WWC prize money.

In a first step toward legal action against FIFA for gender discrimination, the union that represents Australia’s women’s and men’s players is protesting unequal prize money for the women’s World Cup https://t.co/NCB9wrGIg5

Wow! @TheMatildas really are a special group of women representing Australians and all women in what is right, what is fair, what is just.
Show Respect… lip service doesn't cut it.

What’s more, the best player in the world – Ada Hegerberg, Norvegian – is even boycotting the event, in the name of equality.
Something we’ve seen during the latest Super Bowl, when superstars like Colin Kaepernick, Rihanna, Jay-Z, Cardi B, and Pink called for a complete boycott to raise awareness on the racial injustice still impacting the American society in 2019.
On top of that, most of the US players are part of a lawsuit, accusing US federation officials of gender discrimination.

Now, if you’re reading this post, chances are that you’re interested in the event itself. And you’re probably going to watch a couple of games on TV.
Well, if you don’t want to miss any information about the competition (and its side stories), you should take a look at the Public LIVE Dashboard we’ve put together for you.

Not to miss any of the key online conversations about the event, we created an advanced alert (or boolean alert), using Mention.
Here’s what it looks like: 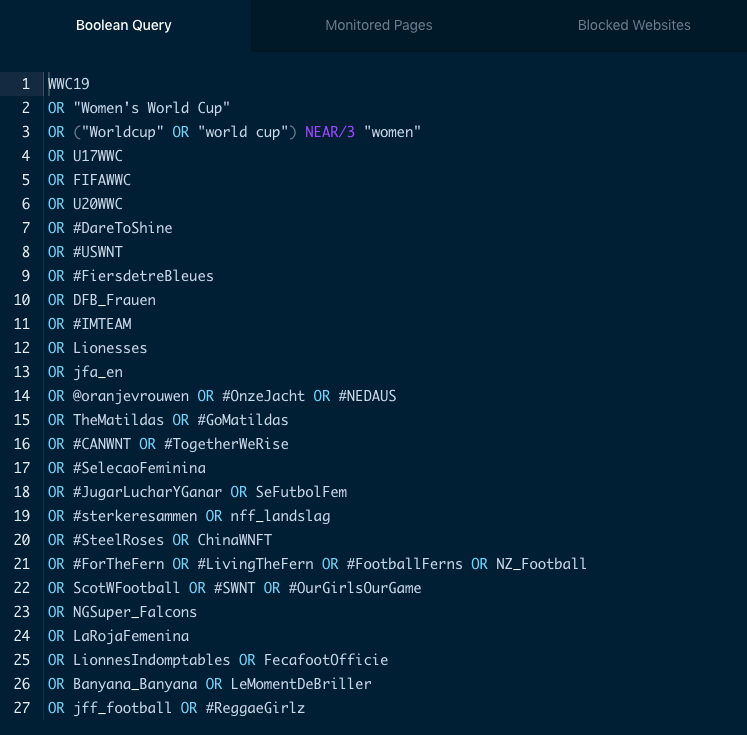 If you’re not familiar with boolean searches, take a look at this blog post.
We’re basically listening to all conversations including the event’s hashtags, as well as each team involved in the competition.
Click here to follow the LIVE conversations about the FIFA Women’s World Cup 2019. 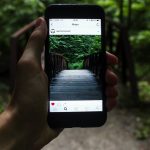 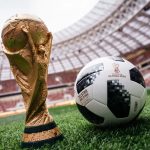 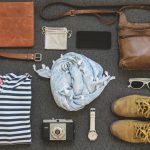 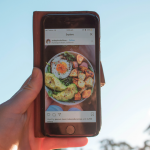 Instagram Engagement Report 2019: What We Learned From 48+ Million Posts