Las Vegas’ CES, or Consumer Electric Show, is the biggest event in the world for all the tech aficionados.
In fact, if there’s a time and place for tech companies to showcase new and breakthrough technology – it’s here!
To give you a bit more context, this year’s CES saw 4500+ international exhibitors, from innovative startups you probably never heard of, to huge global players such as Samsung, LG or Facebook.
We consider ourselves pretty geeky at Mention, and we obviously followed the event closely in Vegas. Even though we couldn’t physically experience it by being there, we were able to monitor all of the trending conversations around it using Mention.
Before we jump into the actual analysis, let’s look at how we monitored all the relevant conversations – before, during and right after the event.

We didn’t listen to all conversations about CES 2019.
For one, it would not have been as relevant – due to the amount of noise we would have picked up along the way.
Instead, we focused on conversations specifically including the hashtag “#ces2019”, from Jan. 3rd to Jan. 14th.

Why you need to monitor your events

Information is key. Those who possess it are given a significant advantage over their competition. Monitoring events, whether they are yours, or your competitors will provide you with three types of information:

If you look at the conversations we monitored during the CES, you can clearly identity these three phases.

In short, monitoring helps marketers and PR professionals to envision the entirety of their event, from conception to wrap up.
What were the main innovations this year? What did people talk about the most? How did they talk about it? Were there any bad buzz? In this blog post, we’ll share what really stoked the public at CES 2019 as well as valuable tips you can use to boost your event marketing strategy.

If I’d had to rely on the newsletters I received during and following the CES 2019, I’d say that the 4K rollable TV from LG and the latest 8K screens were the topics of most of the conversations.
Wrong.
If they were among the most discussed trends, they didn’t steal the show.
AI powered technologies did.

Artificial Intelligence at the center of all conversations

While most consumers don’t know they are already benefiting from Artificial Intelligence, they certainly like to talk about it. This year, more than 10% of the conversations we analyzed in relation to the CES mentioned “AI”.

5G is going to be a game changer. It’s expected to be 10 to 20 times faster than 4G.
That being said, it’s not expected to be commercialized before 2020. Also, our phones are not 5G compatible, and it’s only fair to assume that the first compatible devices will not be cheap. 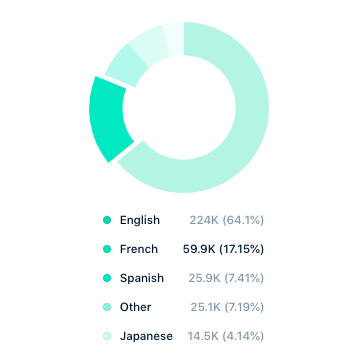 17% of all conversations around the #ces2019 were in French. This is pretty impressive and surprising asFrench Speakers (only) represent account for 3% of the world’s population (220M / 7.2B x 100).
How did this happen?
This is due to the highly active French startup conglomerate called the FrenchTech. Out of the 4500+ exhibitors, 420 were French (or about 9.33%).
Talk about creating buzz and awareness – this is incredible data that the marketing team behind FrenchTech can take back to their stakeholders, proving the their event efforts.

4K and 8K lagging behind

This year, many brands (Sony, Sharp, Samsung, …) presented their 8K screens.
While the technology is impressive, experts remain skeptical regarding the actual usage of 8K in the near future. After all, 4K has been around for a long time, and we’re only starting to see the first applications (TV, streaming, gaming, …).
Another notable innovation this year came from LG and their 4K, HDR rollable TV. This innovation certainly played an important part in placing LG in the top 3 of the most discussed brands during the show. 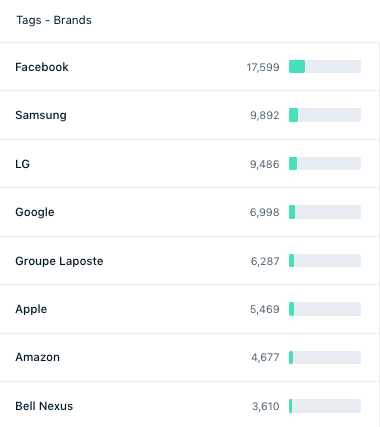 Now, it’s not because something is being discussed a lot that it’s all positive. Right?

How did the overall event echo online?

On top of the 349K mentions we caught, only 2.4K were rated as negative. 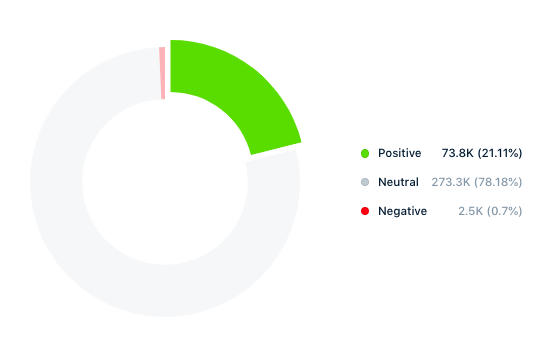 We ran a topic analysis exclusively on these 2.4K negative mentions (meaning none of the positive and neutral conversations were screened in the process). 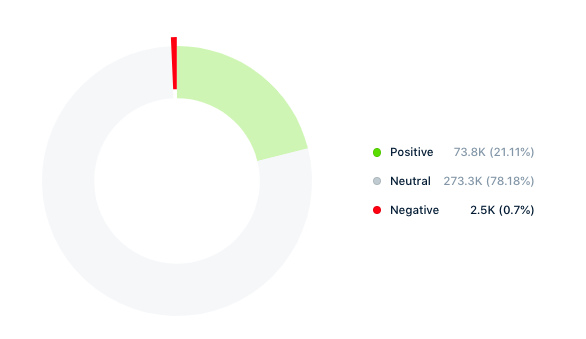 It turned out that half of these mentions included the following hashtag: #cesgenderbias.
What was this about?
A startup named Lora DiCarlo won a CES Robotics Innovation Award for their sex toy for female that was apparently “the holy grail of femail vibrators”.
But a couple of days after that, the award was taken away from them because their innovation was judged too obscene by the jury.
As you can imagine, this ignited a PR fire. 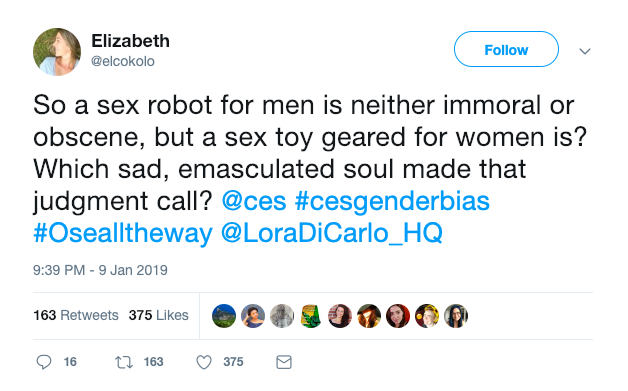 You can find the whole story narrated by Lora Haddock, Founder and CEO of Lora DiCarlo right there.

The purpose of newsjacking is to get media and social attention for your brand by exploiting breaking news and adding your own spin to it.
Which is exactly what Apple did right before the CES. They tackled Google and Amazon’s privacy politics with a massive billboard displayed in the city. 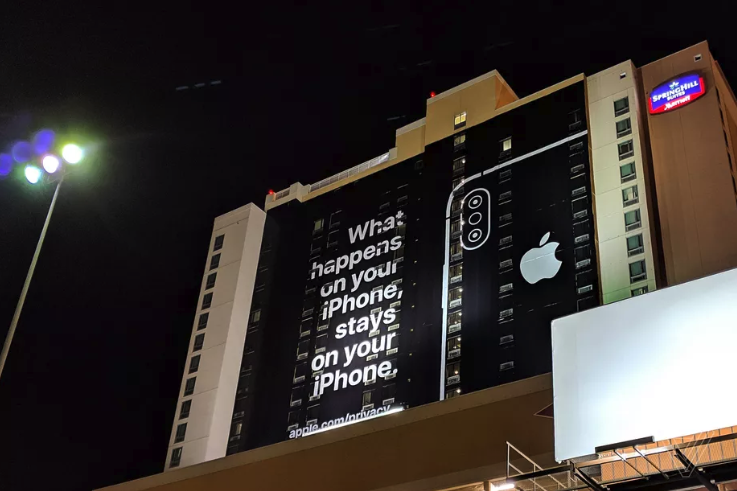 Not a cheap move, but smart and timely.

No one really anticipated the FrenchTech wave this year. Not even the French media. The Journal du Net, one of the main French Tech/Internet focused online publication even used terms such as “Overdose” and “Disproportionate” to qualify the amount of represented French companies in Vegas.
But, at the end of the day, the tech world will remember the presented french technologies. And that’s what matters the most.

Never judge a book by its cover. This year’s CES was once again really well received by the public. With the exception of the bad buzz mentioned earlier in this blog post.
It’s important to note that, as of today, this bad buzz was not addressed at all by the CES organization. Giving it more fuel to grow and later backfire at the organizers.
If responded to early on, brands can actually benefit from negative reviews. In fact, if you need convincing, we recently wrote a blog post in which we share 5 reasons to turn bad reviews into opportunities.

This 4th lesson is more of a personal opinion I’d like to share with all marketers and PR professionals trying to build their brand.
We (humans) are able to re-use space rockets.
We can make colorblind people see colors.
We let surgeon robots operate on people.
You get the picture. Despite our many flaws, what we are able to create is amazing.
And yet, we – as a society – still need to fight for an equal recognition of all people. For a show that should lead the way and be 100% focused on the future, the #CESGenderBias scandal unfortunately revealed that it’s not.
Which leads me to ask the following question to CES’s Robotics Innovation Award jury: where does an innovation stops being an innovation?
Hopefull, CES will take into account what happened this year and be more open in terms of gender-focused products for next terms.
To end on a positive note, we saw so many cool things this year at CES. From AI breakthroughs to health tech innovations, we got to admire the better and smarter technologies that will shape the market tomorrow.
What did you like the most at CES this year? What were you anticipating? Did the event meet your expectations? Tell us all about it in the comment section below!